Inside Galenas: One of Akron’s Newest Medical Marijuana Cultivators 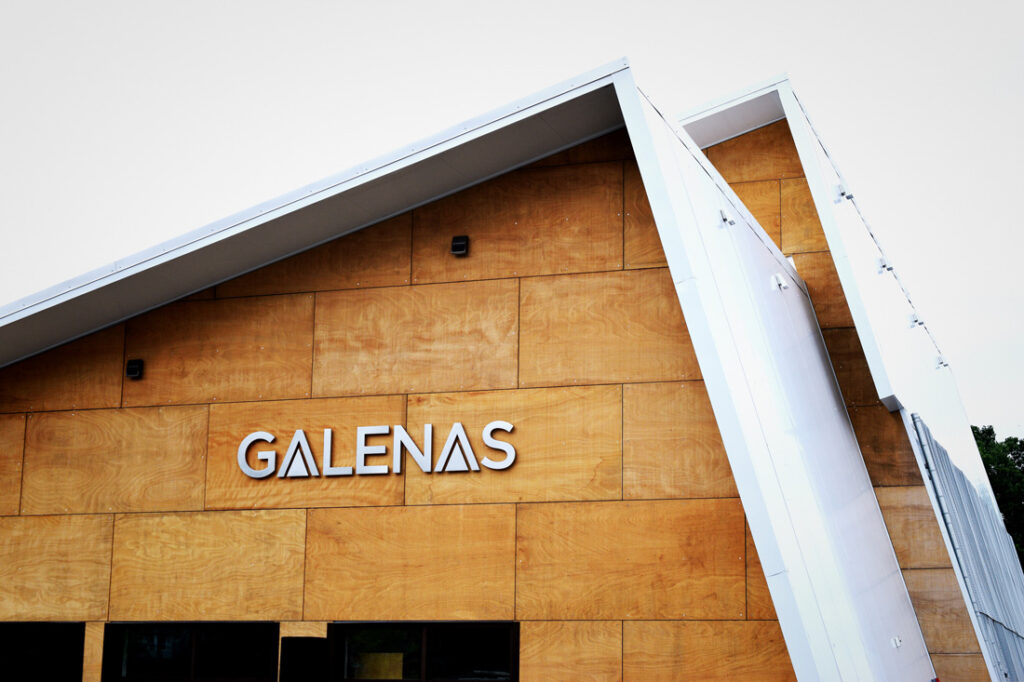 Dozens of medical marijuana cultivators are sprouting up all throughout the Buckeye State. And each cultivator is working hard to edge out the competition. Galenas in Akron is no different.

The Tier II cultivator has been working around the clock to ensure they have the biggest, best Tier II cannabis that Ohio has to offer. But their chief hook to drive business is beyond enticing: Galenas medical cannabis is certified organic!

#420Ohio was on the scene as Galenas celebrated their first harvest on July 19, 2019. The media event provided advocates, doctors, patients, family and press a chance to look inside the dazzling 3,000 square foot cultivation facility and see the gorgeous medical cannabis plants before they are harvested.

The temperature was a balmy 90 in Akron on July 19th. Clouds shaded the sizzling sun. Guests sweat their way through breakfast, and battled the faint whispers of rain in the sky. But the energy was high because guests were about to embark on a journey inside the Galenas cultivation facility.

Geoff Korff, Galenas CEO and Founder, took the stage to greet the melting crowd. “Right when it became legal, I told myself I would do what I can to get the cannabis industry going in Ohio. It’s been three years to now, but we’re finally here! We’ve spared no expense to make this facility great,” he stated.

Before kicking into an explanation for why Korff chose Akron for his facility, he took a moment to thank his wife and family for allowing him to follow his dream. It was a charming moment of honest and candid passion, and it became clear why Korff chose this career — he was driven to do it by the unknown.

“The endocannabinoid system was discovered in 1988,” he stated. “Cannabis that patients use to medicate is translated by this system. Our bodies know what to do with these cannabinoids.”

Korff continued to explain the significance of this discovery, closing his eyes every so often, as if seeing the future. “We did not know what penicillin could do for us when it was discovered. But look where that took us. I believe cannabis is like penicillin, and we have yet to truly discover all of its potential.” 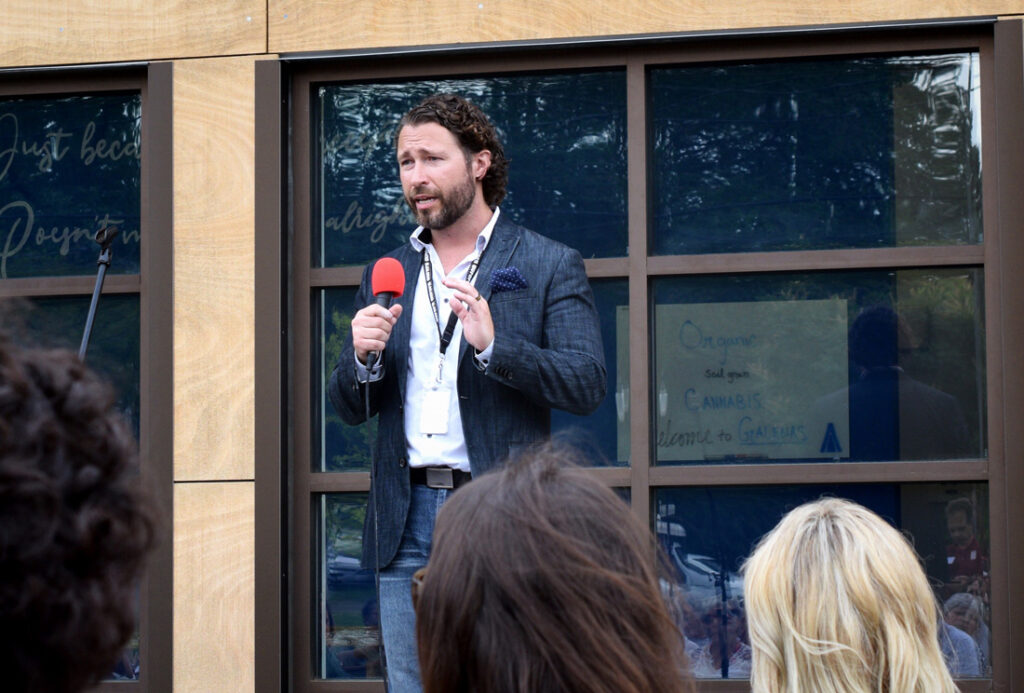 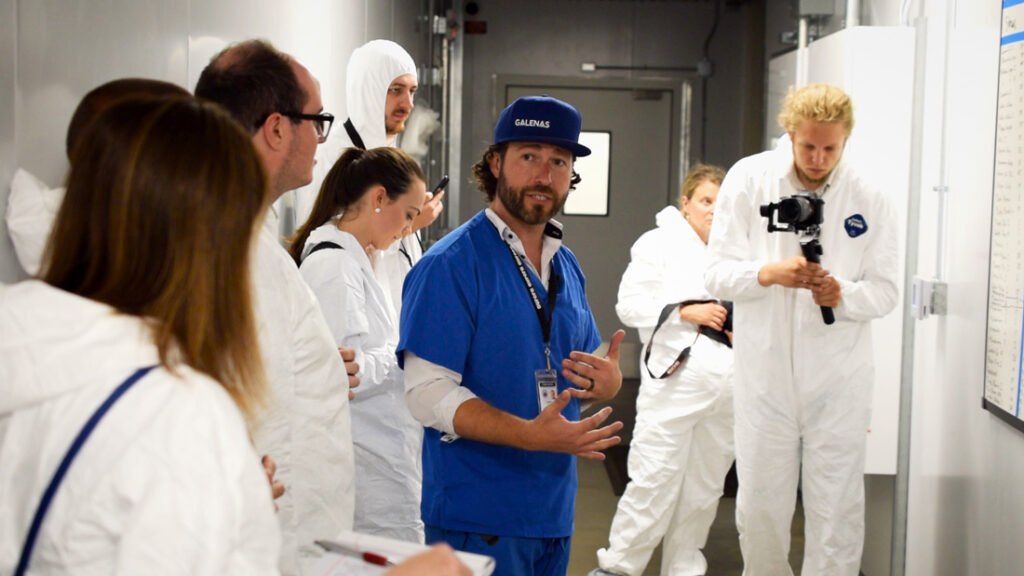 Following the opening statements, guests were escorted in groups inside the grow facility. Press, family and advocates were each instructed to put on white Tyvek suits, or scrubs, that protected the plants from any outside contaminants.

It was already toasty, but the suits amped up the temperatures. Thankfully, the humidity is controlled inside the grow facility, which cooled off the guests. Humidity control is essential to a plant’s health. Too much or too little and cannabis potency is affected.

The Tyvek suits (or scrubs) are an equally important part of keeping a medical cannabis grow facility clean and spotless. The goal is to ensure the health and safety of the plants so that patients can enjoy healthy and safe medication.

Medical marijuana is grown at Galenas using a system known as a vertical grow. This type of cultivation method allows plants to be organized on vertical, mobile racks using an ActivRAC system.

This translates to a much better use of their space. Instead of being limited by one row of plants, Galenas is able to pack thousands of plants into one temperate and humidity controlled space.

This also means they are able to produce more cannabis than other Tier II cultivators on the market. A win-win for patients!

Galenas is also the only 100% certified organic grow in Ohio. But getting that certification is not as easy as one might think.

As cannabis is still illegal under federal law, cannabis cannot achieve the USDA organic certificate. However, cannabis can be certified organic by the organization, Certified Kind.

“We went to great lengths to ensure that our cannabis was 100% organic,” Korff noted. “We wanted the best, cleanest cannabis on the market.”

The facility uses a soil-based grow, with the soil containing fertilizer, nutrients, and microbes. Plants are watered with twice-filtered water. This water is purified using reverse osmosis. CO2 is pumped through the facility to ensure ideal plant health. The facility is even going to compost on-site in the future.

You may also notice the white panels on the outside of the Galenas facility. This was strategic as Galenas plans to create a back-up power system that runs off of solar energy. Eventually, solar panels will be installed so that Galenas can run more energy efficient using sustainable resources. 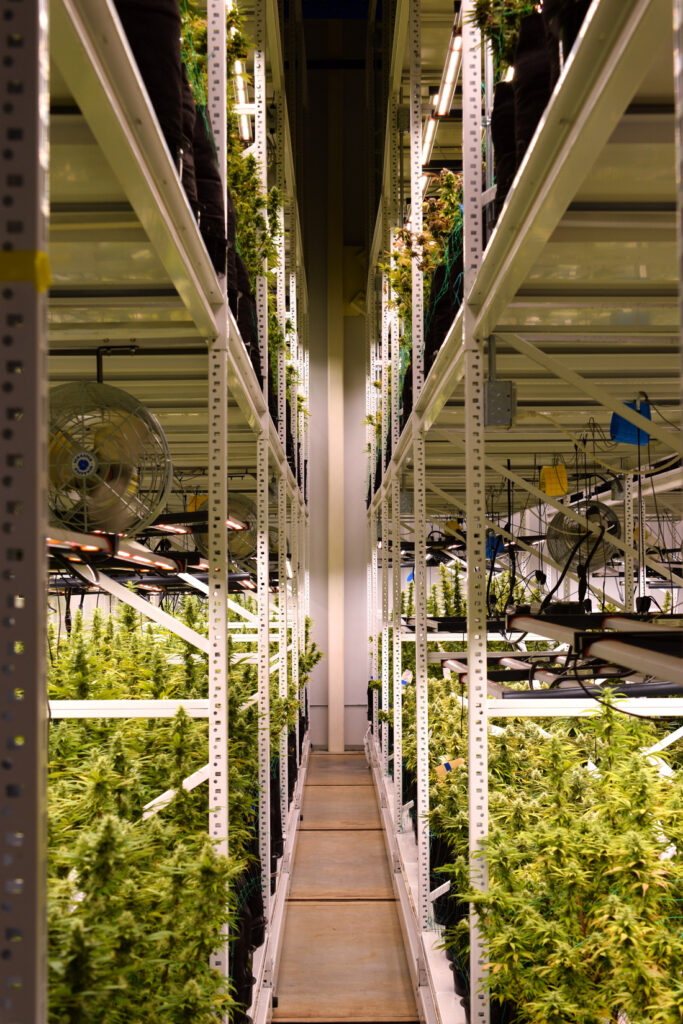 There are dozens of strains being cultivated at Galenas. Each strain will be harvested and tested before being packaged and sold in Ohio dispensaries. Eventually, Galenas will widdle down the amount of strains they have to ones that are popular among patients because they help with a broad spectrum of qualifying medical conditions.

Take a look at the slideshow below for a glimpse at Galenas-grown Ohio medical marijuana:

When to Expect Galenas Medical Cannabis

The first harvest at Galenas is happening in late July 2019. Following harvest, the cannabis plants must be dried, cured and trimmed. Each of these stages can take days or weeks to complete.

Patients should look to see Galenas medical cannabis on dispensary shelves as early as mid-August. But it could take longer if there’s any issues or hurdles the company will face during the drying or testing phases.

We’ll keep you posted on their progress. And be on the lookout for a review of Galenas medical cannabis once their strains are available in Ohio medical marijuana dispensaries. Stay tuned! 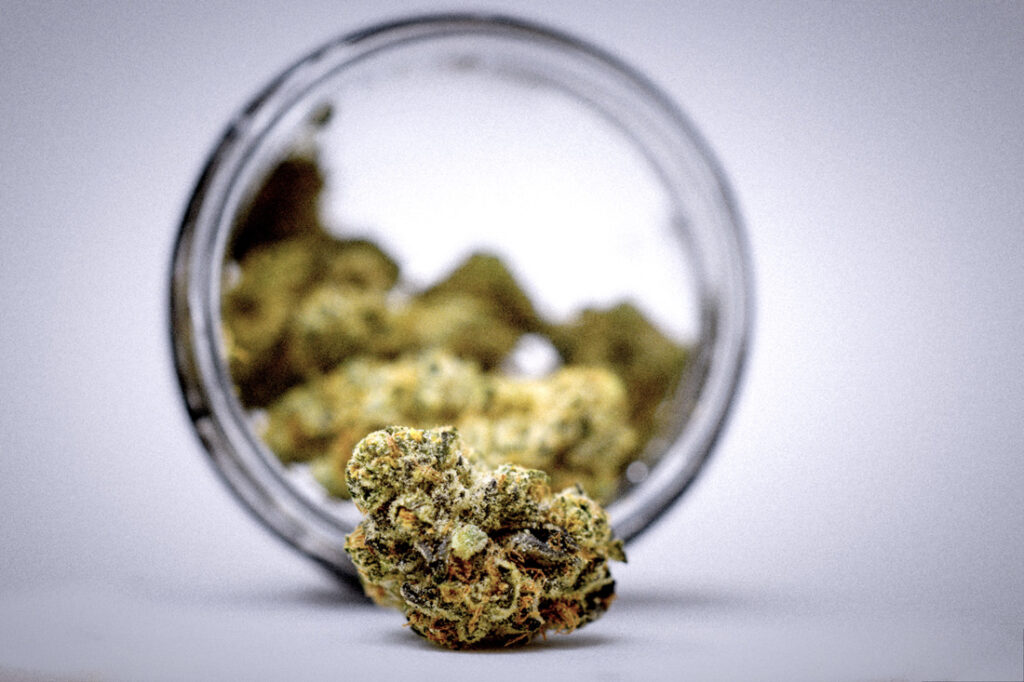 Is this Woodward Fine Cannabis hybrid strain cause for celebration? 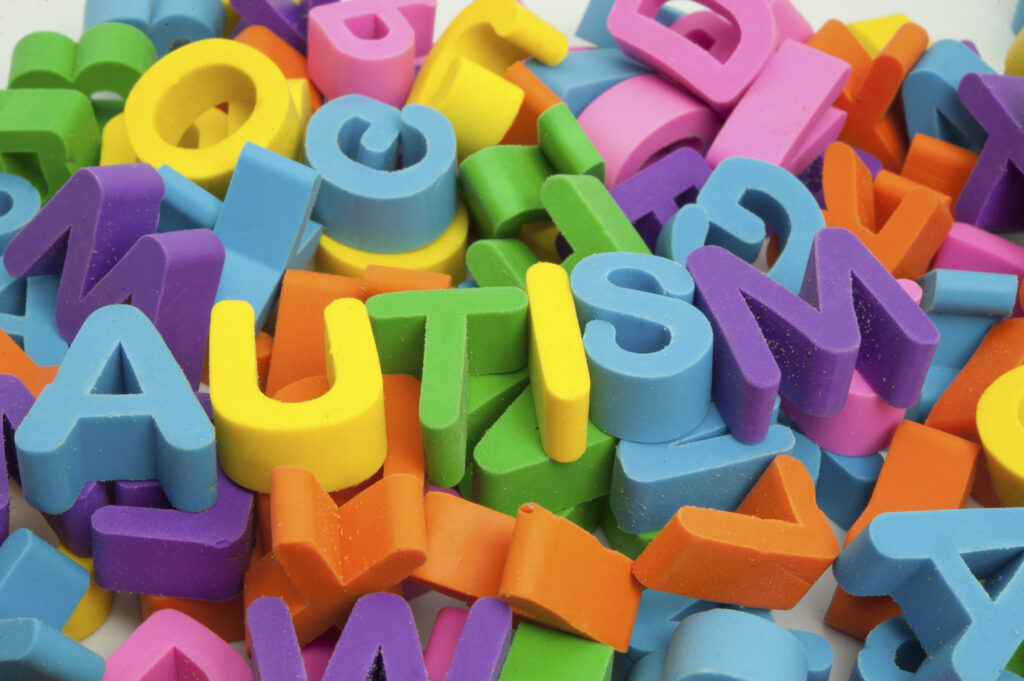 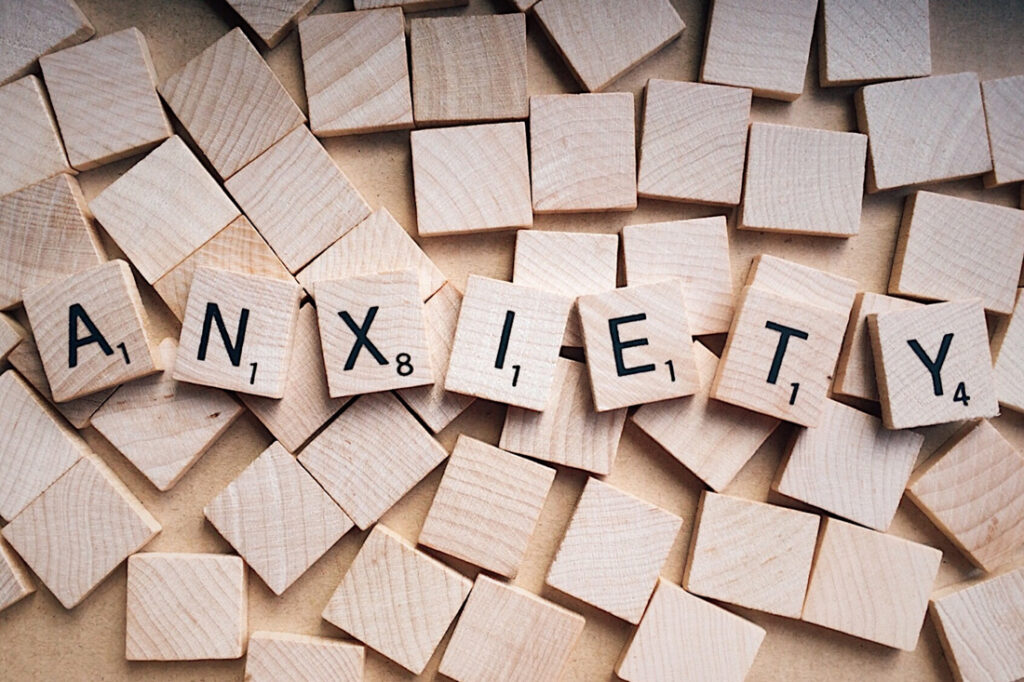 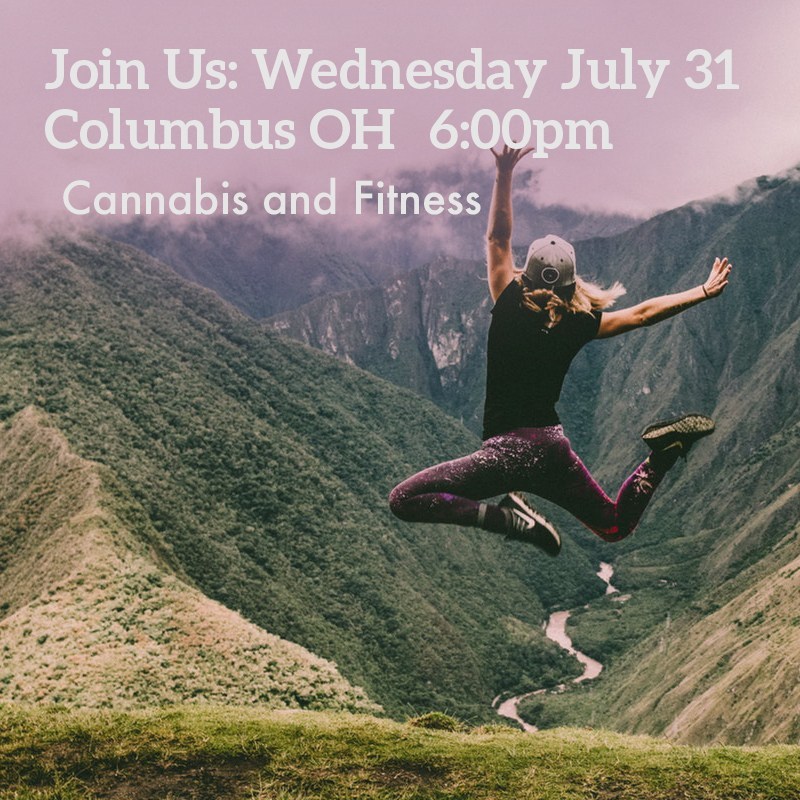 2 Comments on Inside Galenas: One of Akron’s Medical Marijuana Cultivators